Via ferrata in the Dolomites

Via Ferratas are very popular for discovering the wild and rough rocky landscape of the Dolomites.
We climb on steep walls or along exposed ridges. Thanks to the steel cable we always have a good and secure grip.

Short via ferratas - Price per person

Easy/medium via ferratas - Price per person

The first historic via ferrata in the Dolomites has been built in Val Gardena. Financed by the “Pößneck” section of the German Alpine Club and festively inaugurated in 1912, the bold via ferrata runs from the Sella Pass over the craggy rock face of the Piz Selva up to the Sella plateau. Today, the “Via Ferrata of the Meiusles” is considered one of the great classics and still a demanding undertaking climbing track in terms of its overall challenge.

Other via ferrata routes followed and expanded the range of options on the various mountain ranges around Val Gardena. In the meantime, more than a hundred years have passed and walking on steel ropes enjoys an inexorably increasing popularity. “I have met so many enthusiastic people on via ferratas that I must be in favour of them, within certain limits of course and if they are not underestimated,” wrote Reinhold Messner back in 1974 in his book “Dolomiten-Klettersteige”.

In autumn 2021, a modern via ferrata was set up in the Val Gardena Dolomites. The goal was not to reach the summit, but rather to make the path a fascinating experience. In the Sassolungo group, a rock structure was found that had not previously been of interest to alpinists and where small climbing routes already led. And since this hitherto unnoticed ridge is located directly next to the forcella Sassolungo, access from the nearby Toni Demetz Hut can be reached in about 15 minutes. If you want to do it without the cable car and reach the entrance by foot, the ascent from the Sella Pass takes about 45 minutes.

The via ferrata “Furcela de Saslonch” - which stands for “Forcella Sassolungo” in Ladin - has a climbing length of more than 500 metres,
with varied climbing over ribbons and ramps, as well as some steep ascents, overcoming just under 200 metres in altitude.

In the middle section, a secured emergency exit allows you to leave the climbing facility if necessary or if you are overtaxed.
In the upper part, an exposed jagged ridge is climbed and the summit ridge is reached on an airy suspension bridge over a gap.

In a few steps you descend to the Toni Demetz Hut. The magnificent rock scenery all around is impressive, surrounded by the steeply rising walls of the cinque dita summit and the Sassolungo massif.

The difficulties are quite continuous B tracks with some C passages.
Walking time is about 2 hours. Via ferrata equipment and helmet are required. 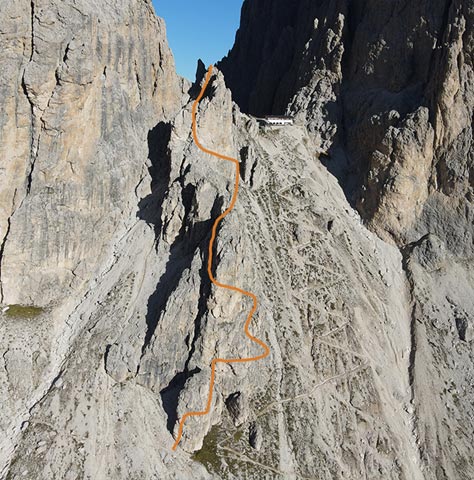 Via ferratas in the Dolomites including the Marmolada

On the first day of this tour, the Plattkofel is on the program. A wild cirque above the Langkofelhütte opens the way to the Oskar Schuster via ferrata and into a world of bizarre rock formations of the pale mountains. On the summit, the goals of the following days can be spotted: the Molignon and the Queen of the Dolomites, the Marmolada. After spending the night at the Tieser Alpl hut, we will cross the airy Laurenzi via ferrata into the quiet core of the Rosengarten group. From there we descend into the valley to tackle the main tour on the last day. Via the wonderful west ridge we reach the highest point in the Dolomites, the Punta Penia at 3343 m

Day 4
Marmolada, Queen of the Dolomites, transfer back to Passo Sella

Of course we will also guide you on any other ferrata in the Dolomites.
Call us or visit us at our offices in Ortisei (open daily) or S. Cristina (open from 5:30pm to 7:00pm).
We will be happy to help you choose the nicest ferrata.

TRIDENTINA
Certainly the most famous via ferrata in the Dolomites.
Leaving from the Passo Gardena the beginning can be reached passing the Pisciadu Hut.
The path leads along steep rocks to the spectacular bridge between the Exner Tower and the Sass Masores.

PÖSSNECKER
This historical via ferrata leads along the west wall of the Sella Group and offers impressive views underneath.


STEVIA – Via Pertini
This via ferrata to Mount Stevia is set in a superb surrounding exposed towards the sun.
Therefore it is possible to climb it from the end of spring until the beginning of fall.

MARMOLADA
The “Queen of the Dolomites”, with its 3.344m, is the highest mountain in the Dolomites.
You can reach the peak on the north side along the glacier or on the via ferrata along the west ridge.

SAS RIGAIS
The highest peak in the Odle Group. The climb is along the west wall and the descend along the sunny southern wall.

TOMASELLI
A demanding ferrata that leads to the Fanis peak passing old wooden ladders and wrecks of World War I.

FERRATA OSKAR-SCHUSTER to the Sasso Piatto

FERRATA OLIVIERI to the Tofana